Some people come in to your life, even for a brief time and, without even trying, make a huge mark.  For me it was a former colleague named Fred Ochs.  I met Fred in 1980 when we both were in Information Technology at Zellerbach Paper Company. Fred was a mentor to me and also a kindred science escapee (he had a PhD in Physical Chemistry and I was on hiatus from a PhD program in physiology that I never went back to). Life went on, Zellerbach was sold and we moved in different directions but I ran in to him years later and learned that he had gotten involved with an  improvisation theater group. He loved it; so much that he decided to quit technology, move to LA and try to make a living acting.

I was so impressed with  his passion, his bravery and his faith in his ability to follow his dreams and carve out a new life.  We weren’t in very close touch for the last few years but I became Facebook friends with him and kept tabs on his career of getting small parts on big TV shows and making indie films and plays.

Fred died on the 31st of December, leaving behind a wife of only 2 years, and a trail of people who loved and admired him.  He was an example to us all and what he did really spoke to me. The world has a Fred sized hole in it now and I’m sad he is gone but ever grateful for having been a witness to how passion and bravery can open up a new life. 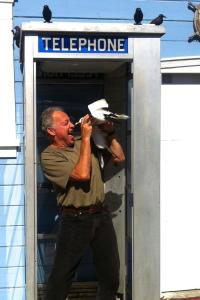 This entry was posted in Gratitude. Bookmark the permalink.